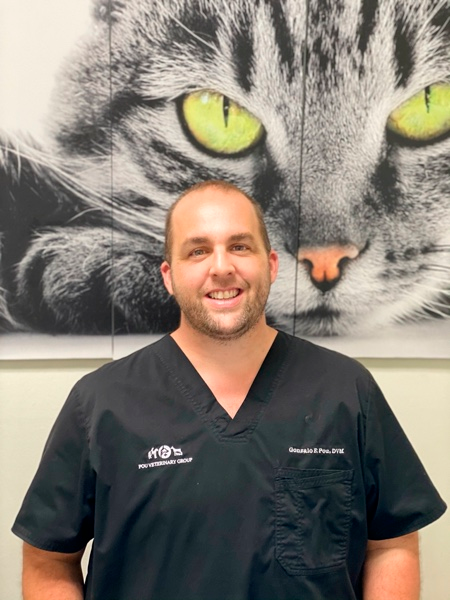 Dr. Pou is a Miami Native, but in his teens, moved to the Tennessee countryside. It was there, amongst acres of untouched habitat, that his passion for animals grew. He raised chickens and horses on his family’s large farm. If it had a heartbeat, Dr. Pou brought it home.

He graduated from St. George’s University, School of Veterinary Medicine, having completed his clinical rotation at the University of Tennessee, in Knoxville. He started his career working at a non-for-profit animal hospital, with a case load of 40+ patients per day, coupled with a multitude of complicated surgeries. It is there that he excelled as a surgeon, and his passion for internal medicine flourished. After two years of a high-paced atmosphere, he founded Pou Veterinary Group and opened its’ doors in June of 2013.

When his wife and kids aren’t dragging him to Disney World, Dr. Pou can usually be found outdoors, either fishing, taking a walk with his Newfoundland named Moose, or enjoying his chickens. 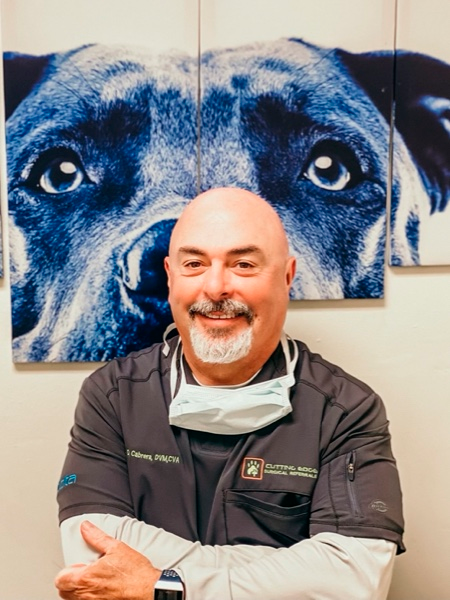 Dr. Mario Cabrera is a lifelong Miami Native and a second-generation veterinarian. He has always been around animals, accompanying his father in a veterinary hospital from an early age. His love for animals became a part of his development as a child and helped shape his character into the valuable physician he is today. Dr. Cabrera.

Prior to veterinary school, he served as a veterinary assistant at his father’s busy practice. Upon graduating from La Universidad Nacional Pedro Henriquez Urena, in the Dominican Republic, he participated in an Intensive Post-Graduate Program at Animal Medical Center in New York City. Dr. Cabrera also holds certifications in Veterinary Acupuncture and Tui-Na from the Chi Institute. and K-Laser Therapy. Upon completion of all his schooling, he took over his father’s practice and grew it to a 5-doctor hospital, 24-hour facility. After years in private practice, Dr. Cabrera sold his practice to VCA Animal Hospital. Dr. Cabrera has devoted much of his time in learning new procedures in rigid endoscopy, orthopedics, and soft tissue surgery. We are fortunate enough to have Dr. Cabrera as our chief orthopedic and soft tissue surgeon.

On his time off, Dr. Cabrera can be found at home with his wife, Diane, and their 5 children (and 2 golden-doodles named Chloe and Zoey). His hobbies include traveling and boating on the beautiful Miami waterways. 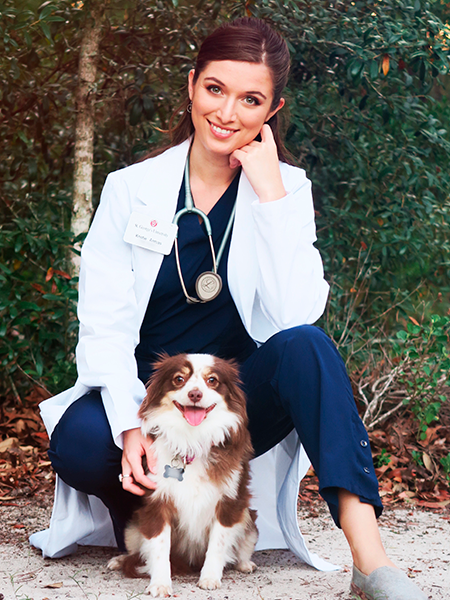 Dr. Kristie Armas is a Miami native who is returning home after living in Central Florida, Tampa bay, and several years in the Caribbean. Since she could talk, Kristie has had a special connection with animals, somehow always finding and bringing home any injured wildlife she would come across. As a child, her father used to raise finches and she developed a special connection with birds and reptiles, with her eventually keeping multiple exotic pets in her teens and young adult years. Eventually this passion for wildlife and exotics would lead her to pursue a career in veterinary medicine.

Dr. Armas is a new graduate from St. George’s University, School of Veterinary Medicine Class of 2022. She completed her clinical year training at the University of Florida in Gainesville, go Gators! However, her career started long before vet school, when she rose from being a kennel assistant, to vet assistant, to veterinary technician in private practice and shelter medicine for a total of 8 years in the veterinary field. As well, during her undergraduate years, Dr. Armas was an active wildlife rehabber and rescuer, partnering with local Tampa bay organizations such as Mote marine, Save our seabirds, and Don't Cut the Line. In vet school, she discovered a new passion for small animal surgery and medicine and solidified her love for exotic and wildlife species.

Outside of work, Dr. Armas is a devoted dog mom to her mini Aussie, Dela. Whether exploring new trails, fishing in the mangroves, or discovering the best new eatery, the two are always adventuring somewhere together.

Save Time and Book Your Pet's Next Appointment Online!